What's Math Got To Do With It? Chapter 5 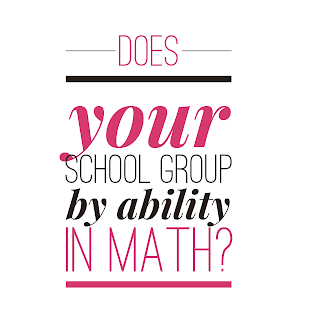 Wow, what a chapter. This one has made me rethink some of my beliefs. Most of my 24 years of teaching math has included grouping by ability. It was such a big push in my early years of teaching – our smaller elementary school didn’t group, but one of the bigger elementary schools did, and the parents pushed for (and got) “equity” among the schools. So we all started grouping. Ability-grouping has become ingrained, so reading (in this chapter) that ability grouping is illegal in some countries in the world, including Finland (at the top in international achievement tests), really surprised me. Grouping is banned because when students are put in lower ability classes, they receive lower-level work, which Boaler says is damaging and suppresses achievement. Non-ability grouping provides more students with the opportunity to learn – which is needed in order to achieve. Makes sense.
Boaler states that in the US, students are typically grouped around 7th/8th grade. (In past years, our district has been grouping as early as 2nd grade....)
This chapter shares research results that support the idea that grouping in math is not the best approach for student achievement.
As Boaler states at the start of this chapter – parents want ability grouping because they want their “high-achieving, motivated children to be working with similar children.” Boaler shares that international studies reveal high-performing countries like Japan and Finland reject ability grouping. The countries that use ability grouping, like the US, are least successful in math.

Results collected about eight-graders from 38 different countries showed that the US had the most tracking (US was in 19th place), while Korea (highest-achieving country) had the least tracking and most equal grouping. US had the strongest link between achievement and socioeconomic success, which has also been attributed to tracking. Researchers concluded that countries that leave grouping to the latest possible moment or use the least amount of ability grouping are the highest achieving.

According to research, when students are not grouped by ability, it helps not just the students who would be on the lower tracks, but also the students who would be on the higher tracks. In mixed-ability classes, there are more occurrences of students helping other students (rather than just teacher helping students). This helps the higher students, because explaining concepts helps them learn the concepts more deeply; it also helps them find their own weaknesses - if they can’t explain, they know where they need to work. Results from one of Boaler’s studies showed that after 3 years of ability-grouped classes, students achieved at significantly lower levels than students who had been in mixed-ability groups. “High” students felt unable to say that they didn’t understand the work, which moved “too fast.”

Boaler shares the belief that tracking leads to a fixed mindset – the belief that “ability” is fixed. For “high” students, being put in a high track led them to believe they were smart. According to the growth/fixed mindset philosophy, this belief sets them up to become fearful of making mistakes and avoid more challenging work. Boaler states that this has especially devastating consequences for high-achieving girls.

Students in tracked classes are often treated as if they all have the same needs and work at same pace, which is not true. When students are not grouped, there is a greater perceived need for the teacher to differentiate both instruction and work. This results in a better match of pace and level.

In research in US classes, it was found that tracked students tend to develop ideas about their own potential, but also about others – as dumb or smart, quick or slow. Students in mixed-ability classes were more respectful and learned to respect different ways of thinking.
According to Boaler, there are two critical components for mixed-ability grouping –
1) Students must be given open work that can be accessed at different levels and taken to different levels. Teachers need to provide problems that will be challenging in different ways, not problems that target small, specific pieces of content. Students will learn different things at different levels with these types of problems.
2) Students must be taught to work respectfully with each other.

At the end of the chapter, Boaler shares that she interviewed students that had been part of studies eight years earlier. Now, as young adults, those who had been in mixed-ability groups were in more professional jobs that those who had been tracked.

Very interesting chapter! So much to think about.
At this point, my grade level does not group by ability, but students were grouped for years before coming to me...

Does your school/district use ability-grouping in math?