Differentiation and the Brain - Introduction 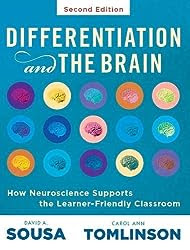 It's summer-time and time to get some reading done!
Myself and my Tools for Teaching Teens collaborators are going to read and review Differentiation and the Brain, How Neuroscience Supports the Learner-Friendly Classroom, by David A. Sousa and Carol Ann Tomlinson.We will each be reviewing different chapters, and those blog posts will be linked together as we go. If you're interested in learning more about this book, check back and follow the links to the different chapters:)

I'm going to give a quick review of the book introduction here, and then later today I'll be reviewing Chapter 1.

According to the authors, differentiation is brain-friendly and brain-compatible! They describe the rise, fall, and rise of differentiation, starting with the one-room schoolhouses, where teachers taught all subjects to all students, of all ages, and HAD to differentiate - there was no other way! As the country's population grew, public schools grew, and students were separated into single grades by age, but differentiation was still common. In the 1930s, the industrial model of education began, and the "middle-of-the-road approach" was adopted. Subjects became departmentalized, class sizes grew, secondary teachers became content specialists, and differentiation became less common as the curriculum became one-size-fits-all. In the 1960s, states began exerting more control over schools, and state departments generated curriculum standards and standardized tests. Districts were becoming more alike, but populations in those districts were becoming increasingly different. Testing results showed modest gains, and secondary students scored lower than students in other developed countries, leading to the realization that one-size-fits-all does not work.  As with many aspects of education, we have circled back to the need for differentiation

According to the authors, this book talks about teaching differently and smarter, not harder.
They state that when properly implemented, differentiation emphasizes a shared responsibility between teacher and student. There are many questions this book will answer; the few I am most interested in are:
1) What kind of model can teachers use as a basis for setting up a differentiated and brain-friendly classroom?
2) What are the five major components of a brain-friendly quality curriculum?
3) What are some strategies for effectively managing the differentiated classroom?

I can't wait to get into this book! I hope you are eager to learn what these fantastic authors have to teach!