I've been reading the book What's Math Got to Do With It, by Jo Boaler, published in 2008 and republished in 2015. When I started reading, I was a little disappointed that I hadn't found the book sooner - there is so much interesting information!

She also discusses a site she created called YouCubed, which I've been using to find tasks for my students to work on. (I just visited the site and saw that she has a new book out  - Mathematical Mindsets! I must get it!)

Boaler references Carol Dweck and her book, Mindset: The New Psychology of Success (I'm reading this one too), which is based on the idea that those with a growth mindset, who believe intelligence can be learned, reach higher levels of achievement, engagement and persistence. This concept, to Boaler, implies great possibilities in the area of math and math teaching.

An interesting idea stated in the preface is that people being "naturally good at math" (or not) is a myth that is "strangely cherished in the Western world but virtually absent in Eastern countries" that top the world in math achievement. In classrooms that Boaler observed in China, numerous high school lessons focused on no more than three questions in an hour - students did most of the talking and discussing and they worked on these questions in great depth....quite different from many classrooms in the US. 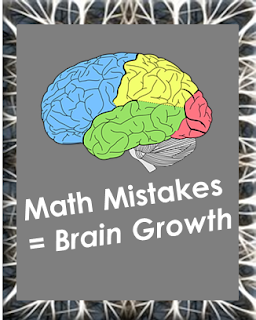 Boaler references research that reveals that the brain can rewire and change and grow in a short period of time. She states that while traditional math teachers believe that some students aren't able to work on complex math, it is that very working on complex math that actually enables brain connections to develop. If students who are considered "low" are given low-level tasks, they won't develop those brain connections.

Boaler points out an idea that I hadn't thought about - math is often viewed as a "performance" subject, rather than a "learning" subject.

Other interesting research Boaler shares - when a student makes a mistake in math, the brain grows. The research shows that making mistakes causes synapses to fire and connections to form - even if the student isn't aware of the mistake! This is because making a mistake is often a time of "struggle," and brains grow the most when they are challenged and engaged with difficult work. When one becomes aware of making a mistake, the brain "sparks" again. Based on this idea, Boaler recommends that students be given math work that does create the struggle, rather than structuring lessons to allow students to arrive at correct answers most of the time.

I've read the first few chapters, but I'll reread to decide what to share here - check back if you're interested!

Has anyone else read this book?