In Chapter 3, Boaler describes two successful approaches that offered students experiences with real math work. These approaches were used in studies that Boaler conducted. The study details that she shares are very interesting (I love reading about research), and I've included the highlights here.

Boaler calls the first approach the Communicative Approach. She completed a four-year study, following about 700 students in three different high schools, to determine that this is a successful approach. Students at one particular school were detracked, algebra became the first course that all students took when entering high school, and the teachers met over several summers to design/alter their courses. In this approach the focus is on "multiple representations," like words, diagrams, tables, symbols, objects, and graphs. The students at this school explained their work to each other, and moved between different representations and communicative forms. Interestingly, these students defined math as a form of communication, or a language. 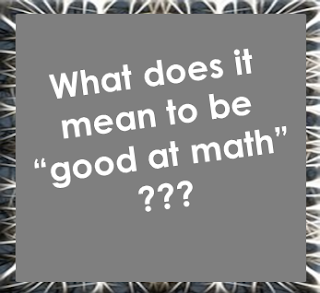 The students taught with this approach worked in groups and were taught that they are all smart, but have different strengths in different areas; everyone had something important to offer. The teachers involved in this approach reinforced the idea that being good at math involves asking questions, drawing pictures and graphs, rephrasing problems, justifying methods, and representing ideas, in addition to calculating. They also followed an instructional design (called complex instruction) that made group work more effective and promoted equity among the students. Students at this school learned to appreciate the differences in one another.

In comparison to the students in the other, more suburban high schools in the study (using traditional teacher-lecture methods), the students at this urban school ended up outperforming the others on algebra and geometry tests by the end of the second year of high school. By their senior year, 41% of the students in the urban district were taking precalculus and calculus, compared to 23% at the other schools.

The other approach Boaler describes is the Project-Based Approach. Students in two schools were followed for three years in this study, which included the observation of hundreds of hours of lessons, interviews with and surveys of students, as well as various assessments. As the name indicates, students in this group worked on projects that addressed math as a "whole" rather than as separate areas of math. In many cases, students were taught certain methods when they needed to use them in the course of a project, rather than being taught the concepts beforehand. For example, in a particular area-related project, some students ended up needing to use trig ratios, so the teacher taught them about trig ratios.
The projects were open enough that students could go in different mathematical directions - directions that interested them. Students could choose who to work with, so some worked alone, some in pairs, and some in groups.

The students at this school viewed mathematical methods as "flexible problem-solving tools," and ended up scoring higher than the national average on their exams, taken at age 16. For more details, you may want to read the book Boaler has published about this study - Experiencing School Mathematics.

As a result of her studies, Boaler concludes that students need to be actively involved in their learning and they need to be engaged in a broad form of math.

Do any readers use a project-based approach to teach math? If so, how does it work for you?