March 08, 2015
Today I'm linking up with The Teacher Studio for Loved that Lesson!

This is a lesson that I wrote about a while back, but I'm at the point in the year when I'll be using it again, so I thought I'd share it for this link up.
"Something Fishy" is a great hands-on activity to help students understand a real-life application of ratios and proportions, AND it gives them the chance to munch on a few Goldfish :-) This is a lesson I found through the Mathline Middle School Math Project, sponsored by PBS (I mentioned this program in the "Remove One" post).

This lesson presents the students with an environmental problem: "scientists have determined that the number of fish in the Chesapeake Bay has decreased. Assuming this is true, scientists must have counted the number of fish and noted the change. How did they count the fish?"
After introducing the problem, the students brainstorm ways that the scientists could count the fish.  I have four math classes, and in each class, there was a student who said that scientists could tag the fish. So we discussed how tagging the fish would work, and talked about the capture-recapture method. Using a sample ratio, we talked about how we could create a proportion to figure out an estimate of the population. 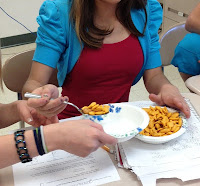 I didn't count the number of fish that I gave each group...I simply poured fish into the bowl...but they all ended up having 70-90 fish.

I demonstrated all of the following steps for the students, so they understood what to do, and then I gave them a RECORDING SHEET that also included the directions.

Student steps for the lesson:

1. Students "capture" a sample of regular goldfish from the 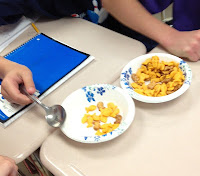 container. This sample should be tagged by replacing them with pretzel goldfish, and the "captured" goldfish should be set aside and no longer counted in the population.
2. Students put the tagged fish back into the container and mix up the fish so that the tagged fish are evenly distributed.

Move on to the recapturing:
3. Capture a new sample and record both the total number of fish in the sample and the number of tagged fish in the sample. Return all fish to the container.
4. Recapture 6 times (or whatever you have time for...we were able to do 6 times, and we have a 40-min math period).
5. Guide the students to create and solve the proportion for their "bay."

6. Have students count their fish and then compare their estimated total with the actual number of fish. Some of my groups got fairly close...I believe the closest was an estimate of 68 and an actual count of 74. It seemed that the groups with larger sample sizes ended up with closer estimates than those with smaller sample sizes.
7. Allow students to eat the goldfish!

What ratio and proportions lessons are your favorites?