We spent a couple of days exploring surface area recently! We haven't done much with surface area in past years, so approaching this was new for me, a well as for the students. We started out with various shaped boxes (rectangular prisms) and I asked the students to visualize and then draw what the boxes would look like if they were taken apart and laid flat (without all the separate flaps and such). Most students took about 5 minutes to complete their drawings, depending on how detailed they chose to be, and for the most part, they did a very good job drawing their nets. They then spent a few minutes comparing their nets with their group members, deciding whether they were correct (even if they were drawn differently), and determining whether anyone appeared to be missing anything (some students did draw only five sides, and their group members were able to help them figure out what was missing). 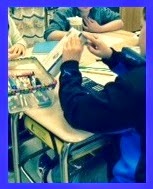 After drawing their nets, the groups had two tasks - to find the surface area of their particular box and to determine a formula for the surface area of rectangular prisms. We have already studied area, so the only thing we discussed before they set upon their tasks was the actual meaning of the term surface area. So, they set off measuring (asking if they should measure in centimeters or inches - I said it was their choice) and calculating.

Most groups determined their surface area by the end of the class period, but none of the groups were able to decide upon a formula. We continued the next day, and while some groups were able to write a formula that reflected a correct understanding of the concept (though not written correctly "variable-wise"), others were stumped. Even though they were stumped about writing a formula, the "stumped groups" were able to explain to me HOW they had found their surface area. Most of them explained that they found the front and multiplied by 2 because the back is the same, and that they found the top and multiplied by 2 because the bottom was the same, (and the same idea for the sides), and then they added those three sums together. Other groups found the area of all six surfaces and added them all. One group found the area of the 3 different sides, added them and then multiplied by 2.  Based on our conversations, I know that they all had a correct way to find the surface area, but writing a formula was difficult. Some groups were very close with their formulas, but had to be guided toward naming the length, width, and height with different variables.


In the end, several groups wrote good formulas, which were shared and discussed with the class. The students really seemed to enjoy this activity - it was challenging but achievable:)  Giving the students the chance to explore the concept and to construct a formula based upon their understanding of surface area was a great use of class time!