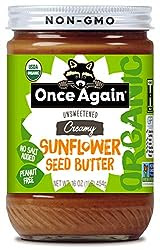 I have been trying the Whole30 Program for about 15 days now, and it's definitely challenging to avoid all of the foods on the "non-compliant" list. The only food I am really missing is peanut butter/peanuts. The reasoning for not eating peanuts, basically, is this: as a legume, peanuts have lectin (a protein structure that may be hazardous to humans), which is highly resistant to digestion and toxic to animals (when raw). All legumes have lectin, but it's usually destroyed during heating. In peanuts, it isn't destroyed, and lectins then fool your gut lining into letting them into the bloodstream by mimicking the structure of other proteins. Undigested proteins shouldn't be released into the body, so the result is inflammation in the body.

Instead of eating peanut butter, the authors/founders of the program suggest sunflower butter, which they say is very similar to peanut butter. I finally picked some up today, and I really like it! Since the Whole30 does not include eating bread of any kind, I had the sunflower butter with an apple. It is very creamy, so it was easy to spread on the apple and would be easy to spread on any bread/toast (when/if I eventually eat that again). I definitely like it better than the almond butter I had been using.

Does anyone else use sunflower seed butter?