While I waited to see if the swelling in my lip would go down (see today's earlier post), I decided to try this recipe for peanut butter protein bars. I did alter the recipe a little bit  - instead of vanilla protein powder, I used chocolate peanut butter protein powder, and I added a handful of chopped up peanuts and a small handful of chopped up chocolate chips. I liked the idea of rolling out the dough while it was in a  gallon-sized baggie. (I've never done that before!)

I also cut the dough into bars while in the baggie, using the back side of a sharp knife (didn't want to cut the baggie). You can tell from the picture that I didn't worry too much about rolling the dough into  a perfectly-shaped rectangle.....next time!

I put them in the freezer for about 2 hours. They weren't completely firm at that point, so maybe they needed to stay in longer; but after the 2 hours, I cut the baggie open to take the bars out and then I put them into individual baggies. I put them back into the freezer and may keep them there....I'll have to see how hard they get. I had little tastes as I was making these, and I had one bar after the 2 hours in the freezer. I did make them pretty thin; next time I will make them a bit thicker. But, they were yum! 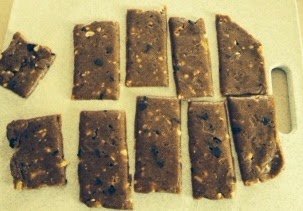 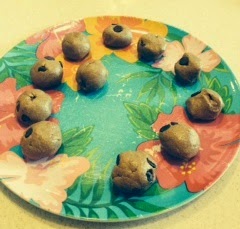 A couple weeks ago, I made protein balls using this recipe, again using chocolate peanut butter protein powder (instead of chocolate). These were very easy and tasty as well.

I think either of these recipes are good for making protein bars or protein balls, whichever you prefer. I'm so glad I tried them. They are simple to make and taste great  (and a bit healthier than the candy I love)!