April 20, 2014
I haven't spent much time on my blog lately:(  I've been pretty good at getting the Workin' On It Wednesday link up posted each week, but not much beyond that. So, one goal is to write at least three times this week. I'm going to branch out a little from just classroom topics, and share a bit about other things. Today's topic - my puppies! 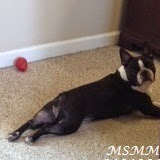 This is Lily "posing" for the camera. My daughter likes to say that she's modeling. She has the greatest personality - so friendly, attentive, and curious. She watches TV with us and shows such an interest in what's happening. Below, she's chewing on a "skull" toy that they've had for years....there's just something about it that she and Oreo love. There can be three other toys around, but they'll "fight" over this one. 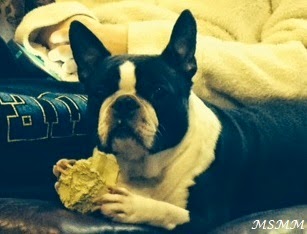 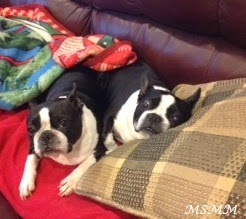 Lily and Oreo love to cuddle....often times, she'll crawl right on top of him to lie down- or on me, or on whoever is available - she's so funny!

Lily is 7 and Oreo is 10, and they are the most affectionate dogs. They literally follow me everywhere I go, except upstairs, because they aren't allowed. They know where I am though, and they wait for me at the bottom of the stairs... 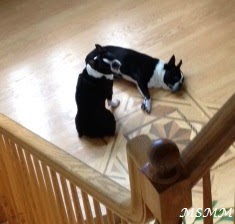 Oreo was our first dog as a family, and he was such a wonderful Boston that we had to have more!

They are fantastic pals!