November 24, 2013
When I taught elementary school, I often pretested every math unit. During some years, it was a requirement, and as a grade level, we regrouped the students according to the pretests. Other years, it was simply something I did on my own, to guide my instruction.

When I started teaching math at the middle level, I sometimes pretested, but often found that most of my students needed instruction in the majority of the skills on the pretest.  Because math classes are shorter in middle school than elementary, and because I always felt behind in the curriculum, I gradually stopped my pretesting practices. 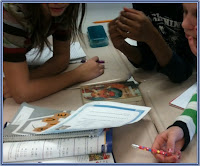 However, this year, many of my students seem to have better background knowledge and mastery of more of the skills than in previous years. In addition, my classes are smaller than normal. This combination led me to try pretesting our decimal unit, to see what the needs were. I found that while some students answered 17/20 questions incorrectly, others answered only one or two questions incorrectly. Because just about everyone had difficulty with decimal division, we worked on that as a whole group. Then, in an attempt to make class more individualized for each student, I allowed them to work through a list of activities at their own pace. I checked in with every student as they completed the addition, subtraction, and multiplication work, to be sure they were all on track. When that work was completed, students went on to use their decimal addition and subtraction skills to answer many word problems; they practiced multiplying and dividing decimals (some more!), and if they completed those problems, they moved on to more complicated problem solving (which they solved with partners, if possible). During class, I was able to pull some small groups for extra reinforcement, while those students who had mastered the skills worked on problem solving. For homework, all students had the same assignments - practicing the different operations and division-related problem solving.


Some students did not get to the more complicated problem solving before our unit test (it was on Friday), but that was ok...they had still completed enough practice of the concepts to be successful on the test.

Overall, I was pleased with the results...although some days were a little chaotic, especially with my largest class...which also happens to be the most needy class.

In the next couple of days, I plan to pretest the classes on the next unit (number theory and fractions); I'm very curious to see whether there is as much disparity in their current skill levels as there was in the decimal unit.