Decimal Matching and Ordering (a freebie) 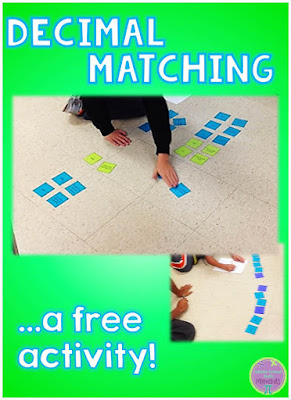 Yesterday I was home sick, so since we had just finished a unit, it was a good day for the sub to give a pre-assessment for our decimal unit. I wasn't able to look at the assessment until today, so I couldn't use it to plan until today/tonight. The students did do a little bit of work yesterday with writing decimal numbers in word form, and we have worked on comparing decimals several times so far this year in Daily Warm Ups book, so we reviewed those ideas today and then did an activity.

The first step in the activity was to match each card with a decimal number in standard form to the correct word form. Students were permitted to work alone or with one partner, and the matching didn't really take that long. I did have similar numbers (like 9.68, 9.068, 9.0068 etc), so that the students had to read carefully and take some time to compare those similar numbers.

Once they had their matches, I checked them before they moved on to ordering the numbers. 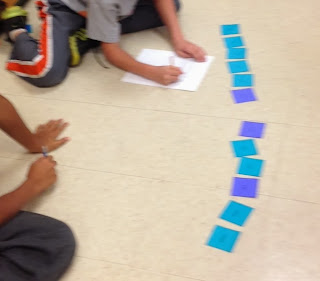 Using the standard form cards only (pic is blurry, sorry!), students ordered the numbers from least to greatest. I did not check these at this time, but instead had them write the correct order on their recording sheets so I could check later. However, as I walked around and checked in with students, I did find some that needed to have a conversation with me about why 2.006 is not larger than 2.06...  this was a good opportunity for individual conversations.

After recording the order, students had to choose 5 of the numbers to write in expanded form.

It was a relatively quick activity (10-15 min), and it gave me a good picture of these skills at this point.

The decimal matching activity can be accessed for free above. It is also part of a larger Decimal Unit Resources file that can be found on TpT.