How many decimeters is it from the front of the room to the back of the room? This is the question I posed to my students this week.

Our team is currently working on an interdisciplinary unit, and one part of it includes metric conversions. The students are learning about the metric system  in science, so I'm supporting that in math class. To being this particular lesson, students brainstormed any possible units that could be used to measure from the front of the room to the back, and they brainstormed tools that could be used to do the measuring. After some discussion about the difference between yardsticks and meter sticks, I gave the students the task of measuring that distance in decimeters. So, they set about the task. They knew what a meter was, and seemed to know where the centimeters were on the meter stick, but they didn't know exactly what a decimeter was, and I wouldn't tell them:-)    I wanted them to struggle some, and try to figure it out on their own. When they were finished measuring, they wrote their measurements on the board.

It was interesting to note the different measuring methods and the results of this activity in my 4 different classes. Some groups used 2 meter sticks and alternated the one they moved, to help measure more accurately. Others used just one and used a pencil or their finger to mark where one meter stick ended and the next should begin.


Results: All of the groups in my first class measured in centimeters, so we took the time to review where the centimeters were located on the meter stick. After discussion, we arrived at the conclusion that the decimeters were the multiples of 10 on the meter stick, and the students then remeasured the distance, to arrive at the correct answer. The fabulous thing about this class is that it has only 14 students, so it allows me to spend more time listening and talking to every student as they work through the problem. 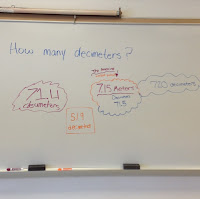 The second class was much like the first, but the 3rd math class had one group that correctly figured out the decimeter measurement.    The fourth class, also a small class, really impressed me. Many of these students asked if they could use a resource to help them figure out what a decimeter was. Some used their science journal to check notes they had written; some used their math books! (I do have a poster in my room with the prefix "steps," but I don't think any of them looked at it...)   All of the groups in this class found reasonable decimeter answers for the measurement (except for one....I think they just counted the number of meter sticks incorrectly, because I could hear them correctly explaining to each other how they arrived at the number of decimeters). I was so impressed with this group!