This year our school was fortunate to be able to have an after-school program for math once a week (twice a week the month before state testing). I was one of the sixth-grade teachers who worked with the students after school. We had room for about 15 students, but had some difficulty convincing those students who really needed the extra time to take part in the program :(

One afternoon, I decided to use a few different games with the students; one of those game was Yahtzee. I was so surprised to learn that of the 9 students present that day, only ONE had ever played it (she had only played it once or twice and didn't really remember how it worked!) Yahtzee is great for so many math skills - adding, multiplying, logical thinking, problem solving....I wish there was more time in my math classes to be able to spend time playing games like this! I wonder how many children ARE still playing these types of games....

I haven't planned exactly how I would approach this type of lesson (since I just thought about it), and looking at the CC standards it seems that this would be addressed more in 7th grade than 6th, but maybe there will be a way to work it in...with Yahtzee or another classic board game:) 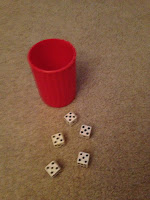 I spent just a little time looking for resources and found this site that has quite a bit of Yahtzee probability info:  http://datagenetics.com/blog/january42012/index.html

Have you used Yahtzee as part of a math lesson?

Are there other classic games that students aren't playing much any more, but would help their math skills?