"Rock Around the Clock" - a Probability Activity 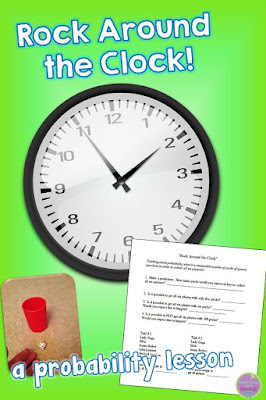 "Rock Around the Clock" is a great Mathline lesson that focuses on probability.

In this lesson, students are presented with a contest situation: in packs of gum, there are photographs of six different rock stars. The first person to collect all six pictures, and take them to the radio station that is sponsoring the contest, will win an all expense paid trip to any location in the US!

The questions posed to the students is this - "What is a reasonable number of packs of gum you should purchase in order to collect all six pictures?" This question is discussed as a class....to think about the fewest number of packs possible, but to consider how many packs would be reasonable. 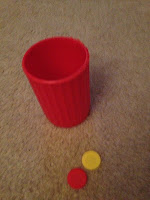 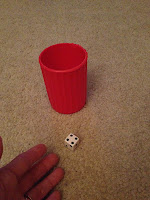 The students are then put into groups and each group is given materials to simulate the contest. I have used this lesson twice; once I used dice and once I used colored disks (on which I wrote the rock stars' names). When using the dice, students simply roll the die and then record the number that was rolled (each rock star would need to be assigned a number). When using the disks, the students picked a disk from a cup, recorded the star that was chosen, and then returned the disk to the cup.
The lesson suggests that each student complete their own trial; I had the groups complete two trials together rather than each student completing their own. I also had all groups use the same materials - the dice one year and the disks another (the lesson plan suggests that the students use dice, spinners, OR disks for their trials and that the lesson then include a discussion about the possible differences in results based on the method used....I did not address this part, but it is definitely an option, especially if you have a longer math period).


Students record their responses to discussion questions and their trial results on the sheet pictured here. (I changed some of the rock star names from the original lesson to names that students would better recognize:) Each time a "rocker" is chosen, students should place a tally by his/her name, even if they already got that rock star. They will need to know the total number of packs bought to get all six stars, so they must be sure to tally the rock stars from each "pack of gum," even if they get the same star 10 times.


The lesson suggests giving students Post-Its and having them place the Post-Its on a number line to create a histogram that displays the different number of times it took students to get all six stars in the different trials. Because of time constraints, we didn't do this, but rather shared and discussed our numbers for students' trials.

The students definitely enjoy this activity and understand the concept that they may certainly need to buy quite a few packs of gum to get all six rock stars.


The original "Rock Around the Clock" lesson can be found here:
http://www.pbs.org/teachers/mathline/lessonplans/pdf/msmp/rock.pdf