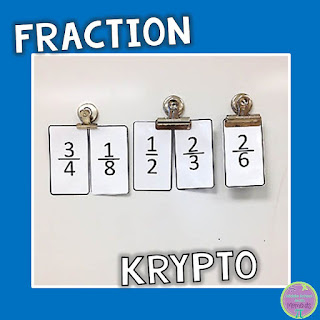 Krypto is a game I learned about at a conference where Dr. Lola May presented (in like 1993, I think!). I didn't realize until recently that it was a commercial game that could be purchased :-)   I had simply used the game idea from time to time, following the rules as laid out in the book. Krypto can be played with whole numbers or fractions (and with positive and negative integers as well, I'm sure!), but for today, I'm going to talk about the use of it with fractions.

The rules are simple (kind of like the "24" game):
1. Choose 5 common fractions, with denominators of halves, thirds, fourths, sixths, eighths, tenths and twelfths.
2. Students add, subtract, multiply, and/or divide the fractions to make the 5 fractions equal the target number of 1.
3. Students can receive points for meeting the target number of 1. If they do so using only 3 numbers, they get 300 pts; 4 numbers = 400 pts; all 5 numbers = 1,000 pts....you can set up the point system any way you'd like.

We're going to try it a few days next week, after we finish all the operations, and since I have my fraction cards, I'll just hang them on the board: 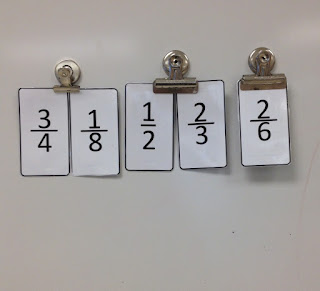 Can you make the 5 fractions equal 1?